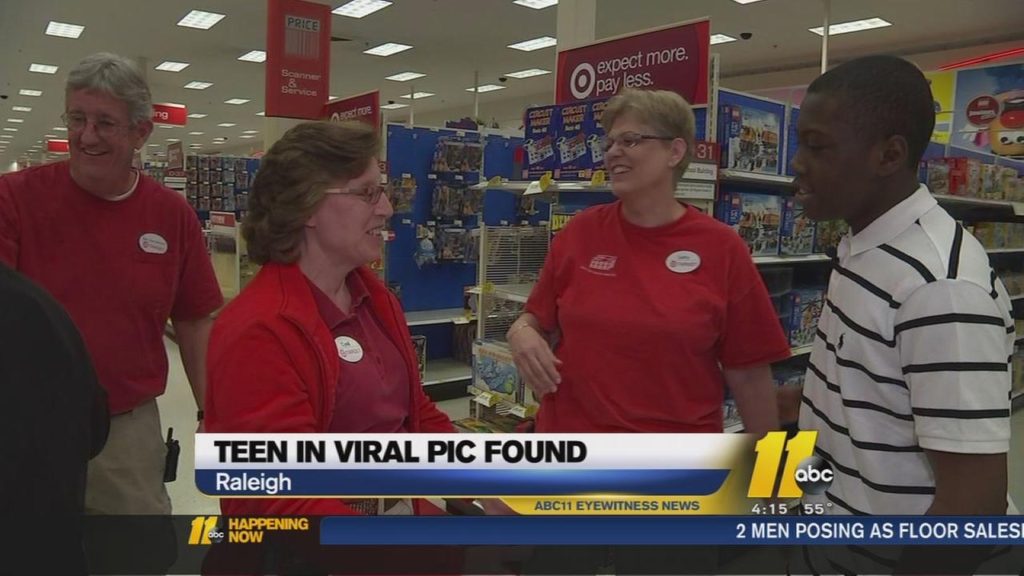 The smartest business owners know that kindness to customers should never take a day off. One reason is that you never know who may be watching.

That was the case on February 4th at the Super Target store near Triangle Town Center in Raleigh, NC. A regular Target shopper named Audrey Mark happened to be passing by the toys section when she noticed a teenaged young man being hovered over by two Target sales associates.

She didn’t realize it right away, but Mark had stumbled upon a sweet scene between high school student Yasir Moore and Target associates Cathy Scott and Dennis Roberts.

Scott had noticed the young man browsing in the men’s wear department asked if he needed help. Moore explained that he was on his way to a job interview at a nearby Chick-Fil-A and needed a tie. He was looking for a clip-on tie because he didn’t know how to tie a regular one. Trouble was, Target doesn’t stock clip-on ties, Scott asked her co-worker Roberts for help.

“Cathy says, ‘Can you tie a tie?’ I said, ‘Yes,’” Roberts later recalled to a news reporter. So after the teenager had selected his tie, he brought it to Dennis in the toy department. Dennis knotted the tie first around his own neck, then he loosened the knot and transferred the tie to Moore’s neck, where he adjusted it smartly and then fixed the teen’s collar buttons.

It was in that moment that Audrey Mark, watching from the far end of the aisle, snapped a photo of the touching scene. “It was a very quiet simple moment, but it was very profound – honestly, kindness from strangers – in a Super Target,” said Audrey, who gets filled up when recalling the random act of caring customer service. “I got so emotional. I got teary.”

The two Target associates then proceeded to prep Moore for his interview. Dennis advised the young man to confidently look his interviewer in the eye. The two also had him tuck his shirt in, so he’d make a neat first impression. Scott reminded him to use a firm handshake when he greeted his interviewer.

“When he told me all this advice, I got my confidence back,” said Moore in a local news follow-up story. “And so when I went there, I was calm, cool, and collected.”

By the time Moore was ready for his big moment, other employees had gotten in on the excitement, too. As he exited the store, they cheered, applauded and called out “Good luck!” to him. The next day, members of the Target team strolled over to the Chick-Fil-A, where they put in a good word for their job-seeking customer.

All in a day’s work, said Dennis of the experience. Which is probably why he and Scott were so shocked when Audrey Mark’s photo – taken on a whim – went viral after she posted it on her Facebook page, quickly racking up over 55,000 “likes”,  5,000 shares and over 100,000 views on YouTube.

“This awesome Target team member took the time to help the nervous teen put on his new tie, tuck in his shirt and then showed him how to give a proper handshake and tackle a few tough interview questions!” Mark wrote in her post. “As the kid exited the store, a bunch of supportive Target team members cheered him on! THIS is true customer service – Right on the mark, Target!! Fingers crossed for this kid’z interview!!”

She closed her Facebook posting in a way that demonstrates how, in the mind of a customer, such random acts of kindness by store associates naturally reflect on the entire brand: “Bought headbands, ham and had my heart warmed…I LOVE Target!!!”

A local TV news report was picked up by CNN, followed by ABC News, and The Huffington Post. Blogs and tweets circulated the news accounts and the story traveled all the way to the Daily Mail in the UK. Everyone, it seemed, was terribly moved by the enthusiasm and goodwill that the Target employees had for their young customer.

David Langston, operator of the Chick-fil-A, told CNN that Yasir Moore had “definitely left a memorable impression,” confirming that he would return for another interview in the company’s three-part interview process. “He’s a really nice kid.” Moore’s third interview is scheduled for Friday, Feb. 13.

The Target team monitoring its social media profile took less than 40 minutes to respond with a thank you to Audrey Marks for her posting. That prompted this posting from another Target shopper, who was in the store at the time: “This picture cannot convey the warmth and kindness in their voices as they worked with him….I didn’t realize this was a random act of kindness, I just assumed that Target had a program to help youths with this type of thing. KUDOS to those kind employees. You’ll never know what type of impact this had on his life !!”

Target’s upper management is delighted by the goodwill generated by their Raleigh employees. Company spokeswoman Molly Snyder told The Huffington Post that the company was extremely proud of Scott and Roberts.

“Our team members love going above and beyond every day for our guests,” she said. “Dennis and Cathy the Target team members from Raleigh, North Carolina are just two of the countless team members who help make Target uniquely Target. We’re rooting for this young man in his interviews, and by the way, we love his tie.”

Key Insight: The best way to become an Internet sensation is to perform genuine random acts of kindness on a regular basis, with no expectation of recognition. The most credible and persuasive viral stories are the ones that display sincere worthy intentions when no one seems to be watching — not the publicity stunts and slick videos cooked up by ad agencies. The more frequent your acts of goodwill toward others, the more likely they will be to be shared and appreciated online. Eventually others will notice and tell your story for you. Even better, the satisfaction you will feel from each act of random kindness will far outweigh whatever social media recognition it may earn.