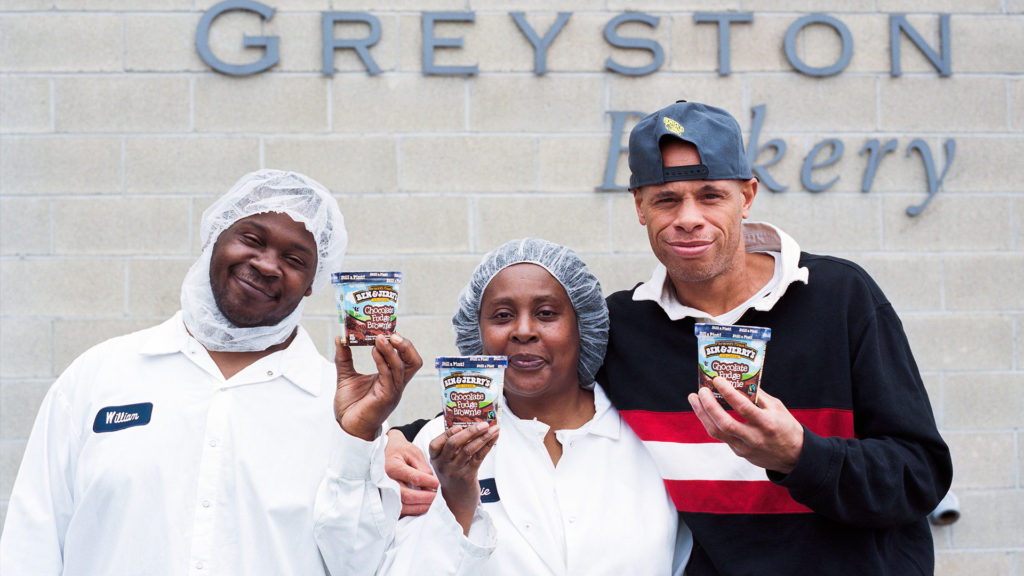 Dion Drew sold drugs on the streets of Yonkers, N.Y., for 20 years, bouncing in and out of jail so often that prison became a second home. By the time he was released from his last stretch of incarceration, in 2008, he decided he was done with his dangerous, dead-end way of life.

“I knew I needed to change but I didn’t know where to start or where to go,” says Drew.  “I went on job interviews every other day, but they’d see my rap sheet and nobody would hire me. My prospects were not high for a legal life.”

Then a friend told him about Greyston Bakery, based right in Yonkers. The 100-employee company, which is a baked goods supplier to Ben & Jerry’s ice cream and Whole Foods grocery stores, has an open-door hiring policy for its apprenticeship program. Applicants are admitted from a waitlist regardless of educational attainment, work history or other common barriers to employment such as homelessness, past drug use or arrest records. In its 2014 annual report, Greyston states that 49 of its employees were previously incarcerated.

After several months on Greystone’s waiting list, Drew was taken on as an apprentice and provided with personal development tools and professional-skills training. Today, seven years later, Drew is a model employee who trains new bakers. He speaks with wonder about his remarkable life, which includes new fatherhood, financial stability and, miraculously, dignity.

“In the past, I wasn’t even thinking about [having] a family because of the circumstances I was in,” says Drew. “Now I have three bank accounts. But this is not all about the money. It’s about being a man and doing the right thing. That’s what I’m doing, and I’m grateful.”


Greyston bakes 35,000 pounds of brownies per day along with specialty cakes like Peanut Butter Explosion and Venetian Wine. Total revenues in 2013 were $17.4 million, an increase of about 5% over the prior year – all under the motto “We don’t hire people to bake brownies. We bake brownies to hire people.”  Greyston’s official mission is to be “a force for personal transformation and community economic renewal.”


In 2012, Greyston formally committed to this social mission when it became the first business in the state of New York to be legally designated a certified Benefit Corporation, which means the company is committed to a social mission, one that it cannot abandon in order to increase profit margins. There are now more than one thousand B-Corps in the U.S., including Ben & Jerry’s, outdoors clothier Patagonia and eyeglass maker Warby Parker.

Among requirements for the B-Corp designation is a company report on its metrics for environmental and social impact. For instance, Greyston estimates that its impact on Yonkers “through reduced recidivism” generates $1.97 million in savings to the county justice system.

“We do it to provide transparency to consumers so they know what it is they’re buying but also the kind of company they’re buying it from,” says Greyston president and CEO Mike Brady. “We want to sell good products to consumers but we also want to live in a nation of active, informed citizens, not just consumers.”

The Greyston employment model, known as Open Hiring, invests in training and development, Brady says, “rather than spending money on interviews and background checks.” Not everyone who enters the 10-month apprenticeship program completes it successfully, but the ones who do turn out to be loyal employees.

Greyston was founded in Brooklyn in 1982 by Roshi Bernie Glassman, an aerospace engineer who became a Zen Buddhist monk with a passion for social activism. He believed that employment was the only path out of poverty and into self-sufficiency. In 1987, the company relocated to Yonkers, a blue-collar city of 200,000 in the northern suburbs of New York City.

The bakery struggled financially until 1988, when it landed a lucrative contract to supply brownies for Ben & Jerry’s Chocolate Fudge Brownie and Half-Baked flavors. Ben & Jerry’s, famed for its socially responsible practices, features a story about Greyston with video on its company website.


“Our founder was a visionary who thought business success and social justice were two sides of the same coin,” Brady says in a TEDx talk he gave last December.  “Our dual focus today is high-quality products but also eradicating poverty in southwest Yonkers.”

New employment opportunities arise at Greyston when employees use their new skills and work history to pursue goals beyond the baking industry. “I’d never baked a thing in my life, I had no experience,” says Greyston baker William Joseph. Today he dreams of opening his own restaurant.

Very much like Dion Drew, Joseph had grown up in crushing poverty and resorted to selling drugs to support himself.  Now, he vows to give back to Greyston for what the company and its leadership has done for him. “I owe them,” he says. “It’s something I’m gonna do no matter how long it takes.”

Key Insight: The B Corporation movement provides a radically new way to define business purpose and success, moving beyond traditional financial results to include the best interests of employees, suppliers, communities and the environment.  It’s an approach that stimulates the kind of unwavering employee and customer loyalty that generates more consistent and lasting benefits for all stakeholders, including shareholders.