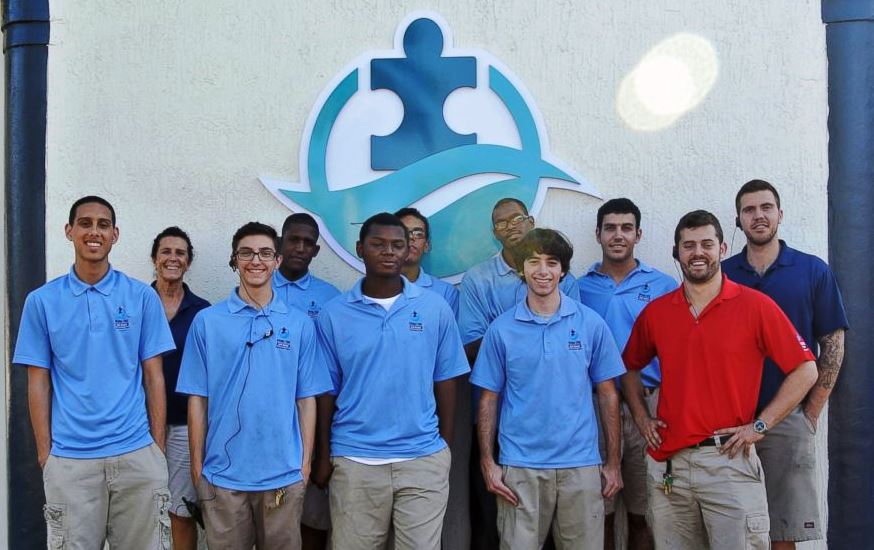 Rising Tide Founder, Tom D'Eri, with a few of his talented employees.

A rising tide, the saying goes, lifts all boats.

And so it is with Rising Tide Car Wash in Parkland, Florida, where business is booming and customers are thrilled with the service provided by its employees, most of whom have autism-related disabilities.

“We wanted to build an example – big and bold and out there – that other companies could go ahead and want to emulate,” said Tom D’Eri, 25, who opened Rising Tide with his father, John, in 2013. Of Rising Tide’s 43 employees, 35 are young adults who had been unable to find gainful employment until Rising Tide hired and trained them.

Rising Tide’s busy location has raised its annual volume from 30,000 cars (under its previous ownership) to over 100,000 in 2014. Plans are in place for two new Florida locations, and D’Eri says longer term plans include selling Rising Tide franchises.

That can’t happen soon enough for advocates who work on behalf of those with autism and other developmental disabilities. Over the next decade, over 500,000 young adults with autism will age out of their current schooling and join the job market.

“We are already at a crisis point, and this is just the start of the wave,” said Laura Klinger, director of an autism services center at the University of North Carolina. “As growing numbers of children with autism grow up over the next six years there will be a 78 percent increase in demand for adult services. These individuals often have strengths that make them good employees, but they face challenges in the workplace and need support.”

The idea for Rising Tide grew out of the D’Eri family’s concern for Tom’s autistic younger brother, 24-year-old Andrew D’Eri. The D’Eris were aware that 9 out of 10 adults with autism are either unemployed or underemployed, regardless of IQ or education level. The thought that Andrew would join those ranks was heartbreaking, John D’Eri told Good Morning America.

So in 2011, John and his oldest son Tom, formed CanDo Business Ventures, a nonprofit consultancy devoted to identifying scalable businesses suitable for employing people with autism. Their eureka moment came when they discovered that the car-wash business relies on employees who possess character traits commonly found among those with autism: a need for routine, an enjoyment of repetitive actions and an obsessive attention to detail.

The father-son duo consulted with experts in both autism and the car wash industry in order to develop a 46-step process for washing cars that could be tailored to the training needs of employees on the autism spectrum. After running a pilot program to test their concept with help from a university-related autism outreach program, the car wash opened in the spring of 2013, representing a $3 million investment by the family.

“Nothing beats Rising Tide,” reads one review on Yelp! “This place takes care of your car as if it was theirs… they know how people like their cars. And I love the fact that they hired people with disabilities. From what I [saw] there today, the people they have working for them are great, kind and caring about what they do.”

Another satisfied customer noted that she could get a good car wash anywhere but “the added bonus in my book is they have a wonderful mission statement. They have a goal in helping people in our community. It’s a beautiful thing to see.”

Managing a workplace with special-needs employees requires special attention to certain details. Supervisors, for instance, are trained for work with autistic adults. Special visual aids are important for helping autistic individuals stay focused, so there are images posted in restrooms to remind workers to double-check their attire and appearance before leaving.

“Our employees thrive on processes and are truly happy to be here. They are the best employees you could ever have,” said John D’Eri. “They come to us with very little hope for their future but once they have success, they really start to open up.”

As for Andrew D’Eri, working at Rising Tide was his first job. Within three weeks, his father said, “There were noticeable differences in his behavior. He was willing to try new things, wanting to empathize more. These are things any family with an autistic child will say are really rare.”

The easy interaction between customers and Rising Tide employees gladdens the D’Eris, who believe that the public’s respect and acceptance of those on the autism spectrum is a natural consequence of simply getting to know them in an everyday circumstance. And although the D’Eri family’s mission is altruistic, they also see the sound business sense in hiring autistic employees, describing them as an untapped resource.

“It’s a really tangible service,” Tom D’Eri told NationSwell.com. “So, you leave a car wash and you understand if it’s clean, or if it’s not. You’re gonna see, ‘Oh wow, these guys did a great job, oh hey, all these guys have autism.’” Key Insight: Purpose-driven businesses that employ disadvantaged workers not only contribute meaningfully to their lives, but also attract loyal customers like a magnet because they know that the business owners genuinely care about the well-being of others.  Of course, the product or service provided also needs to be of sufficient quality and value to meet customers’ needs, but once that requirement is met, making a difference in the lives of disadvantaged workers can be a powerful differentiator that attracts and retains new customers, not to mention very loyal employees.