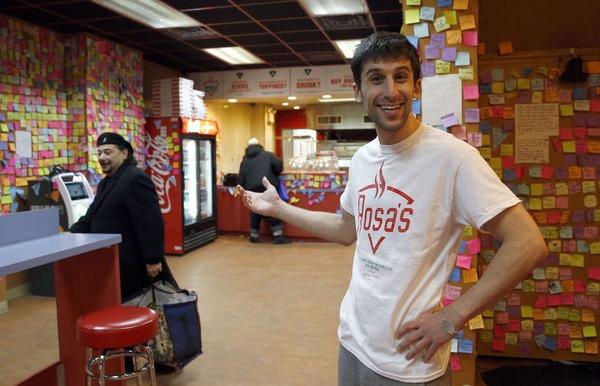 ALL are welcome at Rosa's Fresh Pizza

Mason Wartman set out to be a pizza-shop owner, not a philanthropist. But one customer’s spontaneous act of generosity inspired a change in the way Wartman does business – and has introduced millions of Americans to his Rosa’s Fresh Pizza shop on South 11th Street in downtown Philadelphia.

The 27-year-old Wartman opened Rosa’s in December 2013 with an eye toward duplicating the success of popular dollar-a-slice pizza shops in Manhattan. The modest price ended up attracting a lot of business from foot traffic in the busy Center City neighborhood, including a fair number of homeless people.

One day, a customer was paying for his food when he handed Wartman an extra dollar, asking that it be used to buy a pizza slice for the next needy customer. Wartman grabbed a Post-It note, drew a smiley face on it and then stuck it to the wall, to be “redeemed” by the next homeless customer. Then he placed a sign at the register, inviting other customers to “pay it forward” with an extra dollar to feed the hungry.

Soon, one wall in Rosa’s was covered with a growing number of colorful notes representing donated pizza slices (along with posted thank-you notes from grateful recipients). Wartman estimates he serves about 40 homeless people per day, and that his customers have now donated more than 9,000 slices of pizza. “I didn’t set out to create a purpose-driven company,” he says. “It just came. But it has made my business so much more rewarding.”

Wartman opened Rosa’s (named after his mother) with a $200,000 investment after leaving a brief Wall Street career as a stock researcher. The shop has earned hundreds of rave reviews on Yelp!, Google and TripAdvisor for both the flavor of its pizza and for its pay-it-forward philosophy. “It’s such a simple way for people to help others,” Wartman says. “Anyone can afford an extra dollar, and they know it has a direct impact on someone’s life.”

Rosa’s had already received plenty of local news coverage when, in January 2015, Wartman was flown out to California to appear on The Ellen Degeneres Show. The popular daytime TV host was visibly moved by Wartman’s story, noting that “Most people would discourage the homeless from coming into their establishment, and you’re encouraging them.” She presented Wartman with a $10,000 donation (care of show sponsor Shutterfly) and implored her three million viewers to visit Rosa’s and make donations through the pizza shop’s website.  The video segment below has been viewed nearly 6 million times and inspired over 61,000 shares on Facebook.

After that, business at Rosa’s just exploded. “Basically, there was life before Ellen and life after,” jokes Wartman. The response in both foot traffic and web traffic was “overwhelming,” he says, to the point where he had to change his daily inventory management to avoid running out of supplies before closing. Then, two weeks after Ellen, Wartman and his shop were featured in a segment on The Today Show. Rosa’s has a vibrant, up-beat feel to it, with the regular customers – paying ones and beneficiaries alike – mixing easily with tourists and out-of-towners  on break from conferences at the nearby convention center. “It feels like home,” says Howard Euker, a regular customer who works nearby. “It just feels right – like he’s doing the right thing.”

Besides the Post-it notes from donors, the décor at Rosa’s includes numerous thank you notes from recipients:

“I just want to thank everyone that donated to Rosa’s – it gave me a place to eat every day and the opportunity to get back on my feet. I start a new job tomorrow!” The response to the pay-it-forward concept has inspired Wartman to expand the opportunities for his customers to give. Rosa’s has a Square payment webpage where anyone can give away slices online. Wartman has also introduced a line of Rosa’s T-shirts and sweatshirts, with each $14 tee paying for seven donated slices of pizza and each $40 sweatshirt resulting in the purchase of an identical sweatshirt for a needy customer.

It was always Wartman’s plan to open additional Rosa’s Fresh Pizza shops, but now he sees expansion as a way to also spread the pay-it-forward model. “I’m going to ride the wave as long as I can,” he says. He imagines a world where other restaurants offer customers the opportunity to feed the hungry.

“Think of Chipotle,” Wartman says. “A customer might not pay an extra $7 for a burrito to feed the homeless, but what if Chipotle created a $2 beans-and-rice dish? Customers could add that to their bill and a homeless person would get to eat. Chipotle has more than 1,600 restaurants. Imagine the impact it would have.”

Key Insight: Companies and brands with a purpose-driven mission demonstrate that they care about more than just their own financial gain. Customers in turn feel admiration, trust and loyalty toward them, which contributes to consistent growth and profitability. Rosa’s purpose, which was never part of its original business plan, has become the overwhelming driver of Mason Wartman’s success.