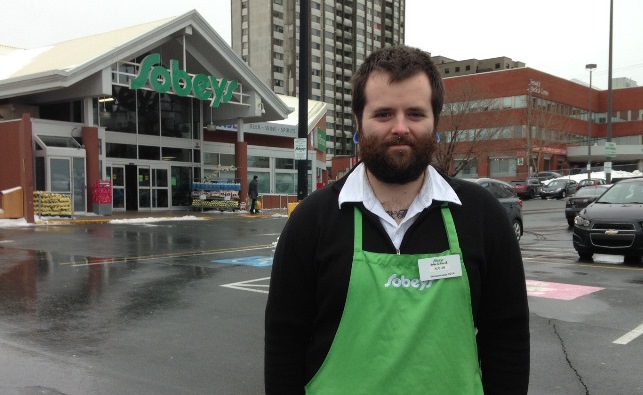 It was a frigid January morning in Halifax, Nova Scotia, and Terri Bordage Stevens was riding with a friend down Queen Street when she saw something so wonderful she asked her friend to slow down so she could take a picture.

In front of the Sobeys supermarket, a bearded young man in a Sobeys apron was walking slowly down the snow-lined sidewalk, linked arm-in-arm with an elderly woman. He held the woman’s bag of groceries in his left hand and the woman held a white cane in her right hand, indicating she is visually disabled.

Stevens was so moved by the simple goodness of the scene that she posted the photo of it on Facebook, writing, “Big shout out to whoever this employee is…An employee was helping an elderly lady home as the sidewalks are very icy. Now that’s putting your customers first. Please thank him for being a great employee.” “They always do that at Sobeys, whoever takes me around there,” Cogswell told reporters. “Once they got to know me, they started automatically, on their own, doing it and asking the supervisor if they could walk me up and the supervisor would say yes. If that person couldn’t walk me up, they would always see to it that somebody did.”

Sobeys staff members have been helping Cogswell home with her groceries for more than five years, regardless of the season. In other words, what appeared to be a random act of kindness wasn’t random at all – only the passerby’s photo was.

The publicity resulting from that photo prompted another Sobeys customer, Shelley Adams, to share her own praise of the company’s “above and beyond” practice of customer service. “What most people don’t know is that this act of kindness on display at the Queen Street Sobeys store in Halifax is not an isolated incident,” wrote Adams in a letter published in the Halifax Chronicle Herald. “In fact, it happens every day at Sobeys locations across the Maritime [provinces].”

Adams, who is legally blind herself and a counselor for the Canadian Institute for the Blind (CNIB), attested that both she and her clients rely on generous help from Sobeys employees. “While I can travel to and from my grocery store independently with my guide dog, I do find it challenging to read food labels and price tags, or to know in which aisle to find certain items,” she wrote. “Sobeys employees have helped me — and so many other CNIB clients — with everything from selecting items off the shelf and identifying which products are on sale to assisting with transactions at the checkout.”

One of only two national grocery retailers in Canada, Sobeys Inc. operates 1,500 stores under retail banners that include Sobeys, Safeway, IGA, Foodland, FreshCo, Price Chopper, Thrifty Foods and Lawtons Drugs. Sobeys corporate mission, included in its brand slogan, is to improve the lives of Canadians by helping them “Eat Better, Feel Better and Do Better.”

“Everybody at the store likes to help people out,” Austin MacNeill told a reporter from CBC News. “It’s just kind of the thing we do. It happens on a daily basis.” He credited Mary Cogswell with being easy to help. “She’s just a really nice lady. She’s just friendly to everybody and she knows exactly what she wants when she goes around and it makes it easy for us.”

The manager of the Queen Street Sobeys followed up by putting Austin’s name and a portion of his quote on the big marquee outside the store: “‘It’s what we do every day.’ Thank you, Austin.”

All the attention has surprised McNeill, who had only worked at Sobeys for six months the day the photo was taken. After a convenience store clerk recognized his face from television reports, he told CBC News, “That was a little weird.”

Cogswell, for her part, is delighting in the notoriety. She told one reporter with a laugh, “One of the ladies from the blind community, she said, ‘You’re more popular than the Queen right now!’”

Key Insight: Random acts of kindness toward customers aren’t just a feel good exercise, they’re also good for business.  The reason such simple gestures seem to be making frequent headlines lately is that they seem relatively rare in today’s business environment.  Each act of goodwill goes a long way toward creating a customer for life, not to mention its powerful influence on others who hear about it, which thanks to social networks is quite a lot these days!