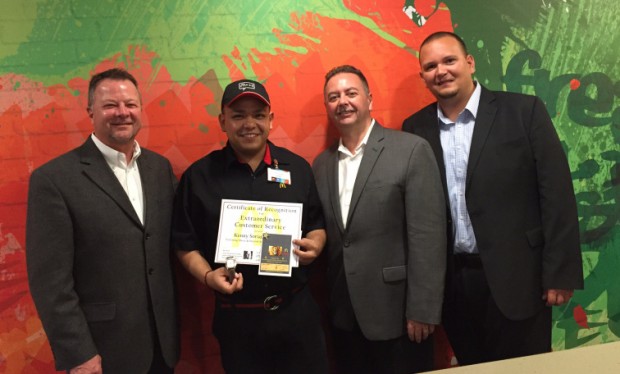 When McDonald’s employee Kenny Soriano-Garcia graciously helped a disabled man cut his food and eat at the downtown Chicago location on September 16th, he wasn’t thinking about recognition or media attention. Rather, he was simply trying to do the right thing for another person in need.

But attention is certainly what Kenny’s getting after assisting 56-year-old customer, Dan Garringer, who suffers cerebral palsy, to eat his food after he approached the cashier for help. The moment was witnessed by onlooker Destiny Carreno, who captured a picture and posted it to her Facebook page, where the photo and caption have quickly gathered nearly half a million comments and shares.

In her post, Destiny noted that “The man politely tried to ask the cashier something and it took him a few tries before either of us could understand he was saying ‘Help me please.’ Neither of us knew what help he needed, and the cashier suggested a few things before he figured out the gentleman needed help cutting and eating his meal.” Destiny wrote that at that point, Kenny shut down his cash register and disappeared from view to wash and glove his hands before assisting Garringer at his table. Kenny cut the man’s food and assisted him with eating it, and then returned to his obligations at the cash register without any fuss or delay.

Touched by the cashier’s kindness, Destiny added “This employee, who put everything on hold for this man, went above and beyond his responsibilities to help this handicapped customer out. That was the kindest and most humble thing I had ever seen.”

After the photo went viral, Jim Haptonstahl posted a Facebook comment providing additional details on Garringer’s condition. “While Dan has cerebral palsy, he has worked his entire life to be as independent as possible, accessing and fully participating in the community.” Haptonstahl is an executive vice president at UCP Seguin of Greater Chicago, a nonprofit which assists individuals with disabilities in the Chicago area. He adds, “In the end, this is a story of an authentic act of kindness…and that’s pretty cool.”

Kenny was recently recognized by the McDonald’s franchise owner, Rob Lubeznik, for his Extraordinary Customer Service to Garringer. Lubeznik also released a statement saying: “We are very proud of Kenny, and overwhelmed by the positive response he has received. It’s a true testament to who he is, and a reminder to us all that one seemingly small act of kindness can touch the hearts of so many.” With all the business struggles and challenges that McDonald’s Corporation has faced over past several years, perhaps they have yet to adequately focus on leveraging their most valuable and compelling asset – the 420,000 people they employ worldwide.  Random acts of kindness by employees like Kenny cost the company almost nothing, and yet can have a remarkably inspiring impact on customer perceptions and loyalty.  What might McDonald’s reputation and business results looks like if all its employees were encouraged my management to make a difference for customers like Kenny Soriano-Garcia did?