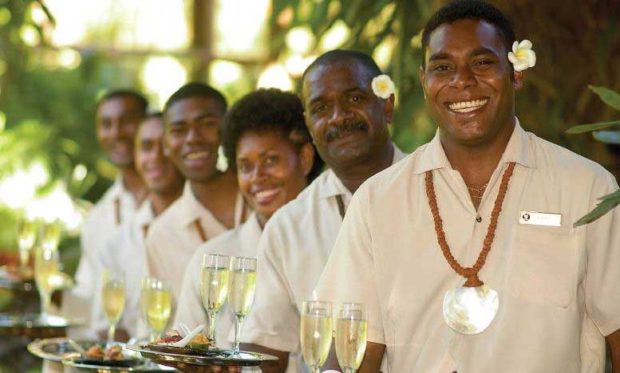 When Caitlin Akthar boarded a flight with her family for the four hour trip from Sydney, Australia to Fiji in 2004, she had no idea she was beginning a journey that would change her life.  It would not be her first trip to Fiji, as her family had also made a visit twelve years earlier, when she was only four.  But this trip would prove to be different.  Her family stayed at the Outrigger Fiji Beach Resort, where since 1993 guests have been hosted with a unique style of hospitality called The Outrigger Way.  Caitlin’s family was so enamored by this experience, they broke with their tradition of exploring new destinations and returned to the Outrigger resort in Fiji again just two years later.

By this time, Caitlin was an 18 year-old young woman, just starting to imagine the possibilities that might lie ahead for her.  During this visit to the Outrigger resort, her family was surprised to find all of the same staff members they’d met and become friendly with a few years earlier.  They were welcomed and hosted like extended family members returning for an overdue visit.   And during this stay, Caitlin began to imagine that perhaps one day in the future, her dream wedding could take place at this magical place, surrounded by her friends and family.

So when Caitlin met her future husband Akki in Sydney in 2007, the wheels of fate began to swing into motion.  They became engaged three years later and Caitlin’s dream wedding took place at the Outrigger Fiji in March 2012.  It was everything she had hoped it would be and more, made easier by an onsite wedding planner and resort staff members that had become more like family members.  Caitlin’s 80 year-old grandmother had been reluctant to make the long journey for the wedding, but after doing so has returned to the resort twice on her own since.  In addition, Caitlin’s parents return to Outrigger Fiji just last year with friends and family to renew their own wedding vows. Caitlin expects the Outrigger Fiji Beach Resort and its staff will continue to play a central role in her family’s most cherished gatherings, describing it as her “home away from home.”  And it seems that plenty of other Outrigger guests feel the same way about the Fiji Beach Resort.  Despite its remote location, General Manager Peter Hopgood says that almost a quarter of the resort’s visitors each year are repeat guests.  At Outrigger’s more easily accessible resorts in Hawaii, repeat guest rates are nearly twice as high, with award-winning Trip Advisor ratings from guests to match.

Outrigger Enterprises Group is one of the largest and fastest growing, privately held leisure lodging and hospitality companies operating in the Asia Pacific, Oceania and Indian Ocean regions, with over 38 resort properties and 4,000+ employees across Hawaii, Guam, Fiji, Thailand, Mauritius and Maldives. Guided by over 69 years of family leadership, Outrigger is a values-based company that strives to deliver exceptional hospitality and authentic cultural experiences, incorporating local traditions and customs into the guest experience at each of its locations worldwide.  President and CEO, David Carey attributes much of the company’s growth and success to its values-based management approach, called The Outrigger Way.

The underlying secret to Outrigger’s remarkable guest loyalty is its longstanding commitment to the well-being of their hosts.  The long-term staff turnover rate at the Outrigger Fiji Beach Resort is less than 2% annually, whereas the U.S. hotel industry average is 50%. CEO Carey explains it this way: “You have to give loyalty to get loyalty.  We do it first for our hosts and then they do it for our guests.”  When its resort in Mauritius was damaged by flooding and closed for nearly a month earlier this year, unlike other resorts in the area that laid off employees, Outrigger continued to pay everyone of its staff members during the downtime.  Thanks to this and other gestures of loyalty, the Outrigger Mauritius resort has the lowest employee turnover and the highest guest satisfaction ratings in the region.

Start With Why: In his best-selling book, Start With Why, Simon Sinek argues that customers do not buy what we make or how we make it, but rather why we make it.  His point is that as humans, we are highly sensitive to the underlying purpose and intentions of others. So if our primary reason for being in business is simply to make money, that is not a “why” that will inspire much loyalty from customers or employees.   Outrigger has reached a similar conclusion and instead has defined its greater purpose through The Outrigger Way.  What is the underlying purpose that inspires the loyalty of your organization’s employees and customers?

Give Loyalty to Get Loyalty: Mistakes and crises in the workplace provide rare opportunities for a company to show its true colors.   When Outrigger’s remote resort locations are impacted by severe weather, they never miss the opportunity to show that their first priority is the well-being of its guests and hosts, even when substantial costs are involved.  Whether it’s relocating impacted guests to another resort or retaining employees through business disruptions, they reshape the crisis as an opportunity to demonstrate loyalty first, as a means to earn loyalty in return. How might your business use it’s next mistake or crisis to demonstrate loyalty to employees or customers?

Involve Customers in Community Service: As part of its effort to foster relationships between its hosts, guests and the local communities in which its resorts operate, the Outrigger Fiji resort has helped build a kindergarten for the local school and a maternity ward for the local hospital.  This is also one of the authentic cultural experiences that guests can take part in during their visit and many describe it as the most meaningful part of their stay at the resort.  Perhaps your organization has community service projects or programs that your customers would find rewarding to participate in?