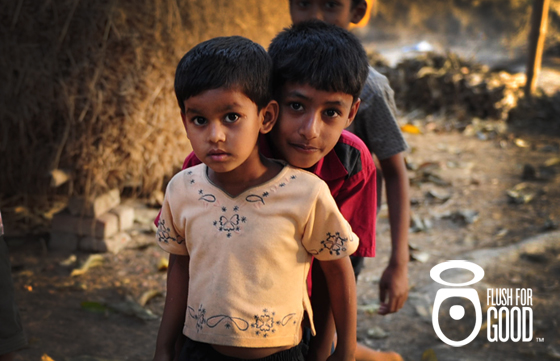 In May 2014, when American Standard announced the results of its year-old “Flush for Good” initiative, CEO Jay Gould went out of his way to tell how the bathroom fixture company wasn’t interested in charity or promoting “some feel-good ‘corporate social responsibility’ campaign.”

Flush for Good, Gould explained, had given customers another reason to buy American Standard toilets. For every purchase of its top-of-the-line Champion model, American Standard donates one of its own inventions – a hygienic latrine-sealing toilet pan — to villages in Bangladesh and Sub-Saharan Africa, where disease and deaths from poor sanitation exert a costly 6 percent drag on impoverished nations’ annual GNP. In Gould’s words, “We asked our consumers to buy a Champion and become a champion for making the world a better place.”

Since the Flush for Good campaign launched, Champion toilet sales have climbed by 62 percent, while more than a million of American Standard’s SaTo (“Safe Toilet”) toilet pans have granted healthy sanitation to an estimated 4 million people in Bangladesh and Africa. The Flush for Good success story is a prime example of how a company can dramatically change its performance by tackling an immense global problem and adopting a purpose-driven mission.

When Jay Gould agreed to take the CEO job in late 2011, American Standard was running low on cash and in turmoil. American Standard’s employee engagement was in the bottom quartile of all the companies nationally, while morale at headquarters scored the lowest among all American Standard locations. Years of downsizing and repeated reorganization had taken a terrible toll on the company. “You could literally feel the fear in the culture,” Gould recalled. “Employees were lacking conviction, confidence and courage. People were so demoralized and fearful, I worried about getting the honest and open input needed to turn the business around.”

Gould was new to the plumbing industry at the time, and he was shocked to learn that 40 percent of the world’s population – some 2.5 billion people – still lacks access to hygienic sanitation. The resulting illnesses from airborne and insect-borne diseases claim the lives of 800,000 small children every year. Gould decided this was an issue that American Standard was ideally positioned to take on. He also saw it as a cause that employees could rally behind. “We needed to create a real purpose, a reason people would feel good about going to work in the morning,” Gould said. “We needed to build a belief that a toilet could literally change the world.”

Luckily for American Standard, its vice-president for research, development and engineering was already familiar with the sanitation problems of the developing world. Jim McHale, a Ph D. in Inorganic Chemistry, had been in discussions with officials at the Bill and Melinda Gates Foundation, which had launched a new project to build the sustainable toilet of the future. Most concepts proposed to the foundation involve variations on high-tech composting toilets, but McHale was curious whether a low-tech low-cost solution might have a larger and more immediate impact on public health in poor countries. As McHale recalls, American Standard’s prior CEO “wasn’t a huge supporter of working in this area, but when Jay got here, he really embraced it. He recognized the power it could provide, in giving a clarifying purpose to the entire organization.”

In 2012, with the help of Gates Foundation grants and its overseas networks of non-profits, American Standard engineers developed an ingenious plastic toilet pan that could be fitted atop the open concrete-lined latrines commonly found in Bangladesh. The toilet pan features a simple trap door that drops open to allow waste and water to fall below, and then snaps shut to seal out odors and prevent insect access to the waste. The SaTo (for “Safe Toilet”) pan was designed to be profitably manufactured and distributed inside Bangladesh for just $1.50 per unit, so that sales could provide a self-sustaining business model. Its simple and elegant design was honored by R&D Magazine in 2014 as representing one of the world’s 100 most technologically significant new products, as well as one of Popular Science’s Best of What’s New products in 2013.

American Standard is currently working with the Gates Foundation and the Clinton Global Initiative on developing a different low-tech solution for sanitation in sub-Saharan Africa, where the dearth of both water and cement makes the SaTo design impractical. McHale has a new role within the company, as head of a new business unit devoted to improving sanitation in the developing world. In September of 2014, American Standard revised its overall mission to include the objective of improving 20 million lives by 2020 by providing safe and healthy sanitation.

“The end game is to provide shareholder value,” McHale notes, “but that’s a result of the company thinking and behaving as one and understanding the common purpose.” Although American Standard is privately held, reported earnings quadrupled in Gould’s first 18 months at the company, through the middle of 2013. By the end of 2014, sales had grown by $200 million and gross margins had climbed by 7 percent.

Employee engagement has leapt to the top quartile among companies surveyed by Denison Consulting, the fastest turnaround in morale that Denison has ever reported. Gould says that rediscovering the company’s core values involving public health (as opposed to devising new, more abstract set of workplace values) is why the cultural turnaround has come so quickly. McHale points out that public health was key to the American Standard brand from its founding 140 years ago, “but through the decades, people kind of forgot that original mission. Jay’s done a great job of connecting the history of the company with this purpose-driven initiative.”

American Standard’s customers are just as happy to be associated with the company’s newly rediscovered purpose. When the Crown Plaza in Times Square completed the installation of 810 Champion toilets, the hotel management requested a letter that they count mount near the registration desk, acknowledging the contribution of 810 SaTo toilet pans to the people of Bangladesh. “People want more than to just buy a toilet that functions,” Gould observes. “They want to join a brand that can make a difference in the world.”

American Standard has no specific program for “giving back” through Corporate Social Responsibility, but as Jim McHale says: “SaTo is already being used by millions of people. Think of those numbers. Most CSR activities would be considered a great success if they made one-hundredth or one-thousandth of that impact.”

Key Insight: Companies and brands that seek stronger customer and employee loyalty cannot be in business just for the money. The work they do needs to be part of a higher purpose that inspires and draws people to them. Growing profits and shareholder value are the outcome of a well-served higher purpose, not the purpose itself. By placing its focus on making a difference in the lives of others, American Standard has demonstrated warmth and worthy attentions to its customers and employees alike, earning their admiration and loyalty.

Footnote: American Standard CEO, Jay Gould, resigned from his position on January 5, 2015.  Lixil Corporation, the parent company of American Standard, issued a statement assuring customers and employees that all of Jay’s strategies and policies would remain intact.  So it appears that Jay has been hired away to take on another yet to be announced leadership role!